Welcome to Get Fit Great Falls!

Get Fit Great Falls is a coalition of like-minded people who encourage neighbors, family, and friends to get active and make healthy choices when selecting foods for their dinner table. 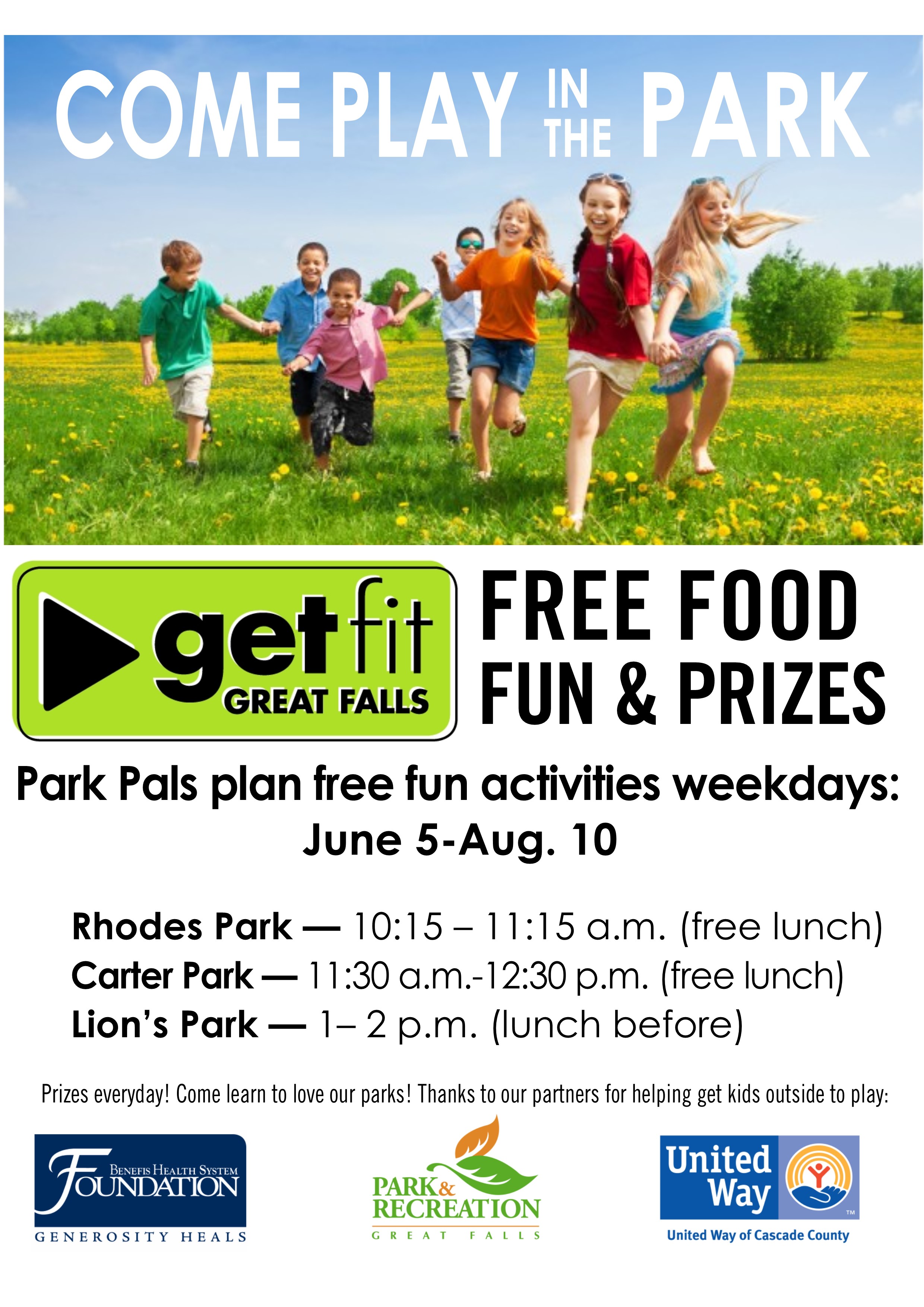 Many people who grew up in Great Falls will remember the “park ladies” or “park grandmas.” The City Park & Recreation Department ended the program more than a decade ago because of budget cuts.

Get Fit hopes to give a new generation of children those same fond memories. Park pals are organizing crafts and science projects and physical activities for an hour every weekday at three Great Falls city parks.

“Great Falls has an amazing resource in our parks,” said Get Fit Great Falls President Kim Skornogoski. “Our goal with the summer Park Pals program was to get kids out of their homes, away from a screen and develop a love for the outdoors and active play.”

According to the 2014 County Health Rankings, 72 percent of people in Cascade County live within a half-mile of a park – ranking 2nd among 48 peer cities nationwide. Yet we rank 28th for the percentage of people who are physically active.

“Whether it’s because parents are too frightened or kids are too preoccupied with television and video games, the days of ‘free range’ kids are gone,” Skornogoski said. “Our goal is to increase the number of kids playing in our parks with the hope that they are building healthy lifelong habits of being active outdoors.”

In its first year, 1,060 kids came out to play with the park pals. In the second year, it grew to 1,636 kids. Seeing its growing success, Skornogoski said the program has room to grow and reach hundreds more children.

Each day, “park pals” will organize a different physical activity that doesn’t require expensive equipment and an art or science project with the hope of drawing kids of all interests to our parks. Kids will play kickball, rainbow tag and capture the flag, and will do activities like making volcanos, play dough and gak.

Starting Monday and going until Aug. 11, activities are planned every weekday at Rhodes, Carter and Lion’s parks. The program is partnering when possible with the Great Falls Public Schools food truck, so kids can get a free meal before or after they come out to play. Last year, the school district gave out more than 14,000 meals.

Prizes will be given out every day at every park and kids have a chance to pick bigger prizes including basketballs and soccer balls after they’ve come 10, 20, 30 or 40 times. Here is the daily park schedule:

The program is possible thanks to grants from United Way of Cascade County. The City Park and Recreation Department volunteered to supervise the park pals and administer the program.

According to the 2013 Community Health Needs Assessment 40.8 percent of people in Cascade County are overweight and another 23 percent are obese.

Cascade County has higher obesity rates and higher death rates from diabetes, heart problems and other obesity-related causes than the state average. While Montana ranks better than many states, the percentage of obese people in our state is increasing — from 9 percent in 1994 to 23 percent today.

To impact obesity, healthy lifestyle choices must be the easy choice. Get Fit strives to encourage free play in a natural, nearby environment. Many children from economically disadvantaged households are disconnected from the outdoors.

To help: Get Fit would like to expand continue and expand the program to reach more parks in future summers. Donations can be sent to Get Fit Great Falls, 115 4th St. S., Great Falls, MT, 59401 or can be made online at www.getfitgreatfalls.org.